Africa is facing a pivotal moment in its role in clinical trial history. With ongoing improvements around infrastructure, continued investment, as well as being home to one of the world’s largest working age populations, the region is finally being recognised as a key contender in the clinical trials market. But for sponsors, challenges and hesitancy remain.

This paper will examine the dynamics of today’s clinical trial market in Africa, taking a closer look at the key challenges the region is facing including the differing regulatory requirements from country to country, as well as supply chain burdens and how sponsors can overcome them to unlock the continent’s growing potential.

Turning attention to the African continent

Considering that it accounts for one-fifth of the globe’s total land area and has a population that is larger than that of Europe and North America combined, the African continent seems hard to overlook, particularly as its working age population will be the largest globally by 2050.

Bearing the largest disease burden in the world, with an estimated 25% of all infections occurring within the continent, it would appear even more unlikely for it to receive limited attention when it comes to the development and trialling of new drugs and therapeutics to prevent and treat disease.

However, while there is focus on diseases concentrated within its borders and more prominently than in other continents, the proportion of clinical trials as a whole conducted in Africa appears grossly insufficient.

Illustrating this is the fact that Africa plays host to far fewer clinical trials than any other continent, according to a study in the journal Trials. The paper calculated that over the ten years to 2014, just 2.3% of trials were carried out there, while almost three times as many were carried out in Oceania where the population is one-thirtieth the size. The reality is that Africa offers huge potential, but that potential is currently going largely unfulfilled.

Covid-19 has prompted an increase in activity, with a paper published in The Lancet in May 2021 reporting unprecedented global efforts in research and development. But of the more than 3,000 trials of interventions for COVID-19 that were underway at that time, only 145 were taking place in Africa, clearly highlighting that an imbalance remains.

At the same time, the pandemic has also exemplified just how critical it is that the drug development process, and in particular the clinical trials that make or break them, draw on a diverse genetic pool order to account for different disease presentation in different ethnicities.

Dr Bernhards Ogutu, chief research officer at the Kenya Medical Research Institute, explains that to date, the bulk of trial activity in Africa, “has been much more focused on the infectious diseases which are more common such as HIV, malaria and tuberculosis, and that have been picked up as major public health problems.”

And while he welcomes the fact that activities have increased in response to Covid-19, he has observed that even in this area, trials have tended to be later-stage, with the early trials and drug development stages being carried out in more traditionally mature markets.

However, he is hopeful that there are early signs of this starting to change. “There are countries that have the developed infrastructure for early phase trials,” he explains. “There might be a concerted effort on building this capacity and making sure that most of the diseases start getting the African genome into the product development.” 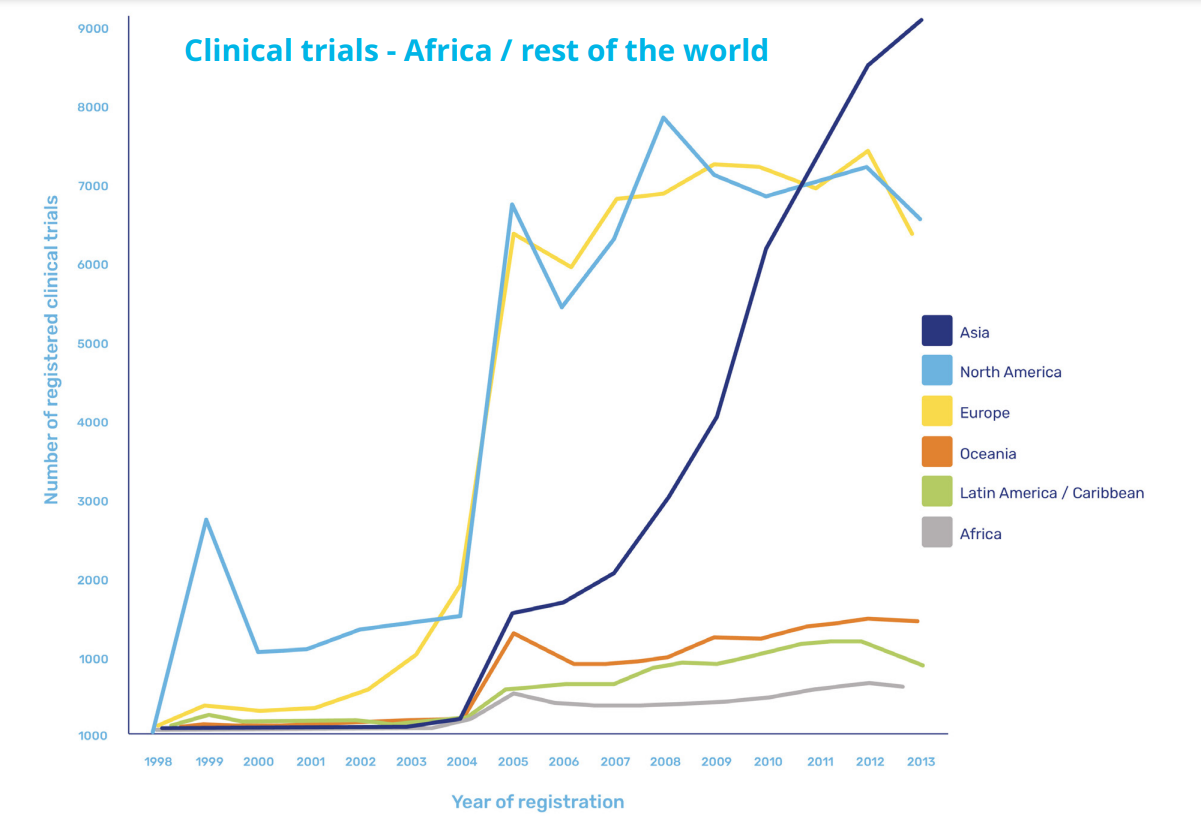 Low levels of activity within the scope of medical trials, and particularly early-stage trials, can be attributed to uncertainty around the required infrastructure – either that it’s not present, or not up to the same standards as found in Europe, the US, or Asia.

This includes issues with general infrastructure, like the condition of roads preventing quick transportation and distribution, but also with specialized study requirements, like sufficient Contract Research Organisations (CROs) in place to carry out the trials.

But while it is true that the capabilities of countries across Africa differ to a significant degree, there are many that have matured in recent years. These countries offer services comparable to those in established regions, which in turn offer the opportunity to expand into those with less developed resources.

This has been driven through the strength of the economy and trading relationships, in the case of South Africa or through the use of existing infrastructure and supply chains that have been established by NGOs and public-private-partnerships to carry out trials and provide treatment across the harder to reach areas of the continent through bodies such as the Drugs for Neglected Diseases Initiative.

The new gateway of East Africa

East Africa is developing rapidly, with Kenya often serving as a central hub, leading capability and capacity development of other countries in the region.

According to research from GlobalData, the majority of the trials in the region are being carried out in Uganda, which accounts for 154 single country trials and 161 multinational trials, and Kenya itself, where 129 single county trials and 143 multinational trials are being carried out. However, activity in the region is also increasing in Tanzania, Ethiopia, and Rwanda as the region continues to mature its infrastructure and local supply chains.

Dr Ogutu, who has played a key role in delivering single and multi-country trials, has witnessed first-hand what is possible, explaining that as part of the Malarial Clinical Trials Initiative, he worked on a trial that was carried out across 21 sites in 10 different countries across the continent. This required significant investment and resources to get up and running initially, but as a result has prepared them to expand into more flexible supply chains.

“They have been putting resources to network and build new capacity in terms of human resource, and physical infrastructure around the clinical trials as they are carried out,” he says. “They have certain sites already, and these sites are the ones they will diversify for trials but use the same infrastructure.”

As these networks develop and intra-African supply chains for clinical trials mature, the opportunities to expand the scope of trials will increase. However, for the potential to be fully realised, sponsors and developers will likely require support in overcoming the regulatory frameworks that have historically been perceived as significant barriers.

Jacob Odika Apollo, consultant at Oximio, has monitored the completion of more than 20 clinical trials in Africa, and he appreciates that the different regulatory frameworks in a continent made up of more than 40 different countries can appear daunting.

However, while these barriers may have proven almost insurmountable in the past, a combination of key local knowledge and close collaboration with the relevant authorities has enabled trial partners to overcome regulatory challenges. According to Apollo: “In terms of the development of regulatory practice, Oximio has a robust and well-developed framework for clinical trials.”

Key to managing this regulatory complexity is a combination of what approvals are required and how long it takes to receive approval. In the case of Kenya, parties are required to submit Proforma Invoices (PFIs) and Certificates of Origin (COAs) which take 14 to 28 days to be granted. Whereas in Ghana, while approval only takes 8 to 10 days, additional permit fees and a Valid License of Importer must also be submitted.

Partnering for success and rapid deployment

A key element to expediting both the approvals process and the delivery of supplies is in partnering with the right partners.

“Shipping direct from USA and Europe into the region, we can reduce the average timeline by 50%, explains Rob Van Den Bergh, managing director at Oximio, who adds that due to having its own depot in Kenya, it can distribute supplies quickly to other countries in the continent at short notice. “In Kenya, we can do a rapid deployment of a clinical trial material a lot faster than you can from Europe and USA as well.”

In addition to speeding up distribution processes across Africa, an established, local network between trial partners and the target region will enable significant cost and administration savings to be delivered through the clinical trials process. “This will be an immense saving in time and money to the sponsors,” says Van Den Bergh. “We’re hoping to roll that out to other neighbouring countries as well, so that they will see the benefit there too, and using Kenya as the new gateway into Africa.” 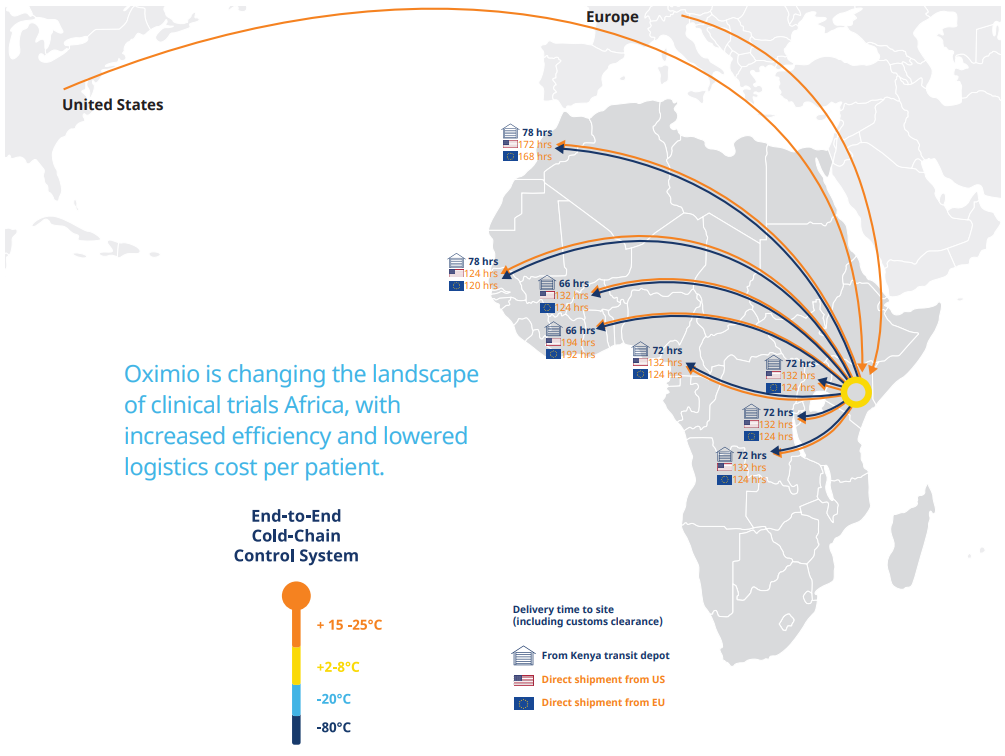 Capitalising on cost savings while reaping the benefits of comparable service

Arrangements such as this are part of wider efforts by trial partners to demonstrate that by enabling regulatory frameworks to operate in a fashion that streamlines the administrative burden and minimises delays on conducting clinical trials delivers benefits for all.

But at the same time as the African supply chains develop to align with those in more established markets, some of the emerging practices in Africa are also starting to gain wider acceptance elsewhere, and by those potentially attracted to carrying out trials in Africa.

One example is the use of remote monitoring in clinical trials. While this has been encouraged in markets such as the US since the early 2000s, it’s adoption more broadly has only recently started to happen as a result of the difficulties created by Covid and the rapid need to conduct large-scale trials.

“Even when you include patient care as one of the benefits of participating in the trials, the petition cost is still much lower than similar studies being conducted in Europe or other markets.”

But Africa is several years ahead of the curve in terms of remote trial adoption, due to a combination of high mobile phone usage, how widely disbursed the population is and, in particular, because of the use of remote trials conducted during the Ebola crisis in 2014. As a result, Africa is well placed to benefit as such approaches continue to grow in prominence.

Ultimately though, the main incentive to those considering carrying out or increasing their activities within Africa is that it is both easier and comparatively cheaper to recruit a broad section of trial participants.

This ease of recruitment is largely driven by the fact that the cost of participants’ medical care is commonly paid for by those running the sites. This has been a cause for concern for potential sponsors, who believe it will lead to cost increases for trials.

However, as Dr Oguto, explains, the comparative cost is still lower even when this is accounted for: “From my experience on site, even when you include patient care as one of the benefits of participating in the trials, the participation cost is still much lower than similar studies being conducted in Europe or other markets.”

As these lower costs are increasingly complemented by stronger infrastructure and faster supply chains, the incentive to capitalise on the potential benefits – both financially and medically – of giving Africa the attention it deserves will gradually evolve into an imperative.